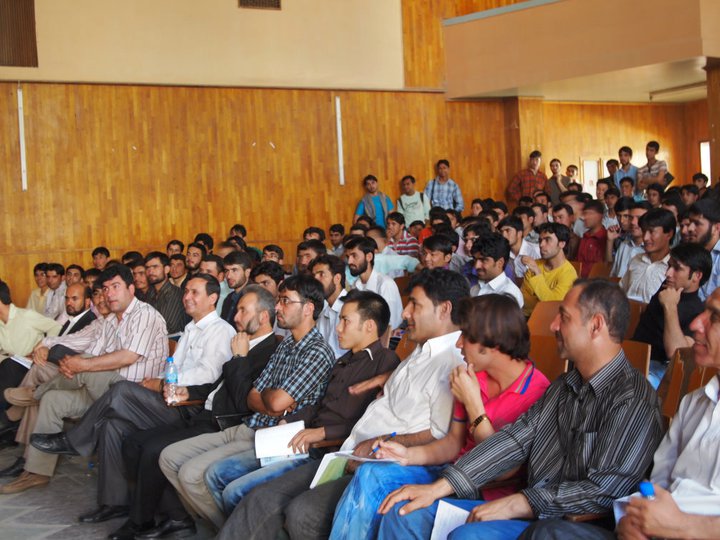 Activists are standing room only at workshop with LIO Friends in Afghanistan on tools for rights by the AELSO which sponsors legal and market studies.

Afghan libertarians and democracy activists, galvanized by LIO Fellow Aslam Effendi, restored basic democracy by reviving the loya jurga or traditional national assembly of household and clan representatives and elders in defiance of the US planners who called the country 'unready' despite 'democracy creation' propaganda, said critics.

LIO Friends in Afghanistan and Pakistan are focused on basic open democracy; spreading ideas on market choices and tools so citizens can combat terrorism, crime and corruption through education and community self-help; and developing networks of leaders to encourage dialogue--and working wonders despite skepticism.

Key projects are centered around initiatives such as Afghanistan's AELSO group, which is doing yeoman work in helping make laws, historical stuidies and basic tools available, and the Alternate Solutions group in Pakistan, which is also developing interest in more advanced voluntary approaches.

Called the Gandhi of that region, the advocate of voluntary and conscious solutions and alternatives wrote best-sellers, poetry quoted through both countries and worked tirelessly on the ground to spread tools for organization. The US invasion unfortunately derailed efforts to oust religious extremists, he felt., but people are continuing the long term work. His work was highly influential in his studies of non-governmental (in the comon sense ) customary legal systems.

When the US proposed that Afghanistans were not ready for democracy despite claims it was sending in troops to 'build freedom,' Effendi began a campaign that resulted in use of a traditional assembly or jurga which set forth a pathway to change everyone could support. Effendi pointed out that change is often 3 steps forwards and 2 backwards, and as education spread people would perfect the system from below and local communities, or federalism. Effendi advocated a non-punitive legal system and pointed to many local tribes that successfully used such methods by focusing on mentoring and prevention.

An effort by LIO Observer Benazir Bhutto was temporarily halted with her assasination, but her party continues democracy efforts (LIO supports no parties per se but maintains connections with many interested leaders)...but the efforts of any party or group are deeply dependent on the work of educational and research groups so citizens can take better direct action.

Those interested in bringing young leaders to Libertarian non-partisan conferences should contact www.isil.org which has a program for the purpose and e.g. profiled the ASI good work: http://www.isil.org/resources/fnn/2004spring/pakistan-activity.html