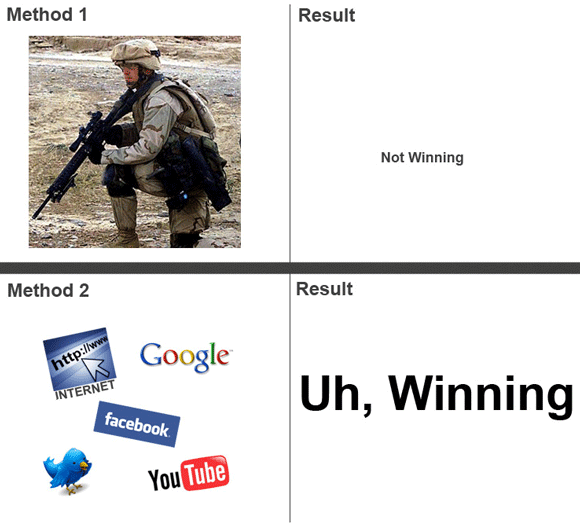 ...fans starting in the Mid-east have adopted  this meme to spread the good word and stay on mission, using English as the effort lingua franca to engage emerging professionals in the various countries. The meme at right has also become popular in explaining the effort which has used everything from ham radios to contact/phone-trees as well per LIO-inspired pamphlets. The effort is the current phase of LIO's long term dialogue--initiated with the blessing of then US President Eisenhower--to by peaceful methods legalize federal and direct democracy with choices of designed and  libertarian community and scientific voluntary association--and peaceful space colonization and future focus using voluntary and private tools.

Note: In 1940 there were, not counting small countries, 14 democracies (Great Britain, United States of America, Ireland, Canada, Australia, New Zealand, Sweden, Finland, Iceland, Switzerland, Mexico, Colombia, Costa Rica, and Uruguay ) . LIO principals have been key in the spread of democracy since that time, starting with work on the Libral International.

LIO's OPERATION DEMOCRACY is being segued by activists interfacing through www.Libertarian-Institute.Info  to gently continue pressure as changes are made. The initiative began in 2010 as an effort to end the excuse for war and set core conditions for voluntary systems by moving the last 40 countries towards democratic process, and continuing with efforts to on dialogue to bring direct democracy, dialogue on marlets and tolerance, and initiate Liberal-Libertarian civic groups in all counties.Help was greatly due to co-ordination with local unions and professional societies, say activists--as well as tools circulated to help e-activism and 'street networking'  with many civic and open society groups which provided workshops. China and Russia were not included in the effort as they're treated by LIO facilitators as emerging democracies where think tanks and other efforts are well at work as in manmy countries where LIO Friends help drive initiatives such as: http://www.southasia.fnst.org/Recent-events/380c4599i1p/index.html

In the US and other advanced countries, predictably, many extreme conservatives and leftists some purporting to be 'libertarians' have written articles or made statements that direct democracy cannot be used to support rights, that democracy is the enemy of freedom, that unions need to be regulated by the government, and other confusions based on gimmicked defintions--along with ritual declarations of libertarian lack of progress, or Liberal/progressive evil. The peaceful organizing has been marred in some countries by big-power military intervention, but effortts remain focused and long-term.

Activists say they will focus on secular legalization ( e.g. ending official religions) and promoting market and user-designed communty tools along with tolerance initiatives.