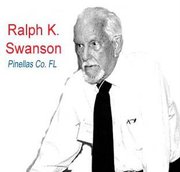 Dr.Ralph Swanson helped found Sister Cities, worked on the UN Declaration with H.G. Wells, and marched with Martin Luther King Jr. Having joined LIO's predecessor organization--the Libertarian-Liberal League-- in 1939 as a teen to combat racism in Florida, he knew key figures and those who had known LIO figures of the XIXth and early XXth century--such as Miguel Lemos, air pioneer and developer of Gilsonite Samuel Gilson, Robert H. Goddard, Ramon Franco plus  principals in  influential LIO Fellow projects such as the Personal Rights Association , the Liberal International, the British Interplanetary Society, and many others.

Past LIO Advisory Chair Dr. Ralph Swanson shared on his Facebook today that he is done editing or approving extensive notes for his memoirs, some 200 articles, and thinkpieces on the civic movement to be published in future years. These include several articles with David Nolan, Dr. John Hospers, and others; suggested pre-posts by the hundreds for LIO blogs; and expose of improper activity by bad actors in the libertarian rights movement coupled with advice to budding groups worldwide.

He has been retired in recent years which, though handling various age-related health issues, has given him time to work on the materials, he said. He is on a local citizen advisory council but no longer makes public appearances..Over the years he played key roles in founding and administering many groups. Dr. Swanson worked for many years in engineering and in intelligence interrogation matters, and was active in the destruction of the once predominant Ku Klux klan which at the time had a massive influence in the US.

The memoirs are centered around what he sees as 10 key meetings in the last 70 years--including a meeting with Eisenhower and JFK for demilitarization and Sister Cities, planning of Libertarian rights parties, and the recent LIO OPERATIONS DEMOCRACY & DIGNITY.  The LIO and other projects he has designated will see to final format of the materials, including introductions to several LIO-based activist manuals and more, at this website.

Quips the twinkling octagenarian to LIO fans: "Stay Vertical! There is work to do."